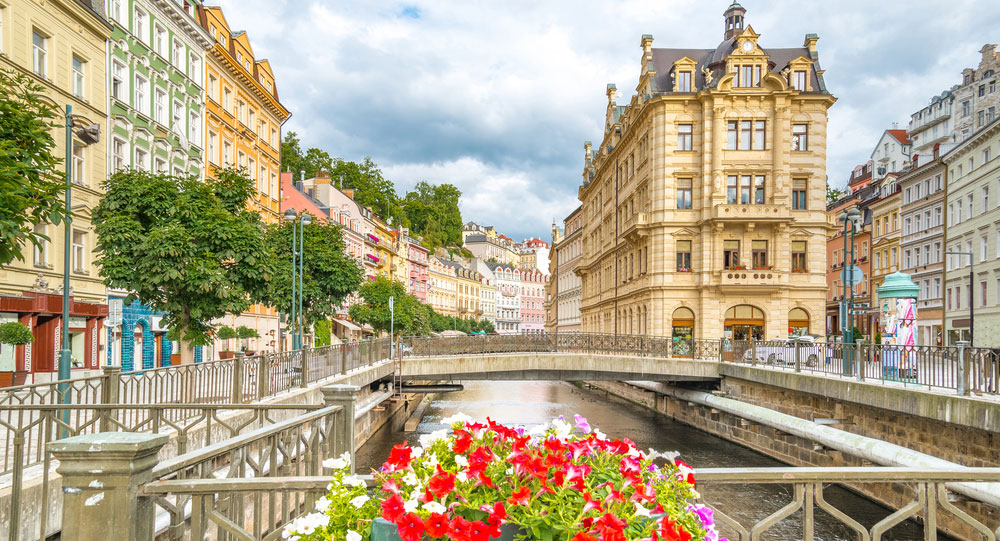 The incarnation of spa elegance, imposing colonnades, exclusive spa buildings and a wonderful layout in the heart of a forested valley. That is Karlovy Vary, situated only about one hour and 45 minutes drive outside of Prague. The best-known town in the world, in which some of the most famous figures in European artistic and cultural life have enjoyed treatment, is today the second most visited spot in the Czech Republic. Thanks to its unique architecture, it is one of Europe’s most beautiful spas. The most well-known spa hotels include the Grand Hotel Pupp, which enchants not only with its unique architecture and could be seen in the movie Last Holiday, another known hotel is the Hotel Thermal, which hosts the world-famous Karlovy Vary International Film Festival.

The royal castle allegedly got its name from the place where the River Ohře creates a charming bend in the shape of a human elbow (loket in Czech). Charles IV allegedly loved the place despite the fact that his father John of Bohemia kept him here by force for several months during his childhood. Visit the torture chambers with an audio backdrop which is not for the faint-hearted. You will also see an exhibition of porcelain with unique spa buttons and a romantic fresco dating back to the 15th century, which displays a view from the castle over gardens with fruit trees, flowers and birds in flight.

Reasons to visit: Karlovy Vary – 12 hot mineral springs used for treating problems of the digestive tract, metabolic disorders as well as oncological and musculoskeletal diseases, Moser glass factory, amazing views of the city as it is situated in a valley, famous movies were filmed here – James Bond Casino Royal, Last Holiday. Loket – a middle age town with a rich architecture, Castle from the 13th century, a museum of freemasons.

This tour price includes:  Pick up and Drop off at the hotel, transport in the Mercedes minivan, my personal service, service of the personal driver, bottle of water, visit of Karlovy Vary town, tasting of the mineral waters, visit of Loket town

The price does not include: meals, entrance fees (a lot of entries are free or low cost – between 5-15 USD per ticket)