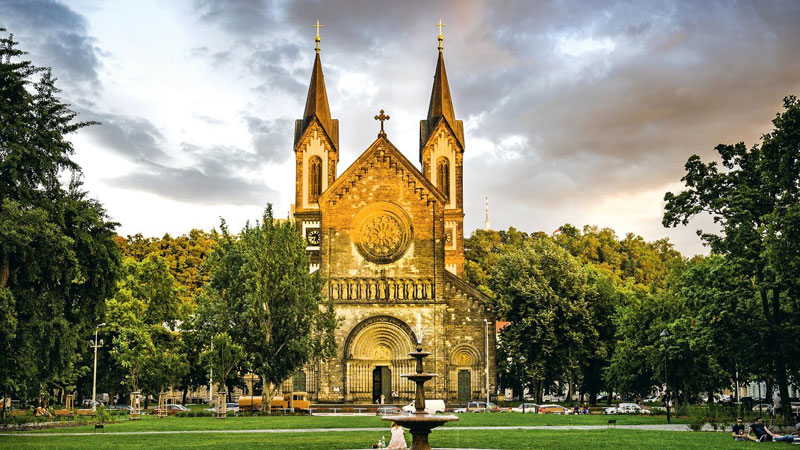 By Lenka Díaz from Prague tours by Lenka

What used to be once a sleepy district, turned after the flood in 2002 surprisingly into a fashionable neighborhood. Today´s Prague society considers the Karlín district one of the coolest areas of Prague that should not be missed. In Karlín you can admire various construction styles – from apartment buildings in historizing styles dating back to the turn of the 19th and 20th centuries to modern office and residential strcutures. The atmosphere of the old original buildings mingles with contemporary architecture and together creates a beautiful unit. Entering Karlín area in the past you would have met a shabby neighborhood where the Vltava river was lined by unattractive industrial premises on one side and by old residential houses on the other side. Nowadays the Vltava riverbank represents the most modern area of not only the Karlín district but of the whole city of Prague. 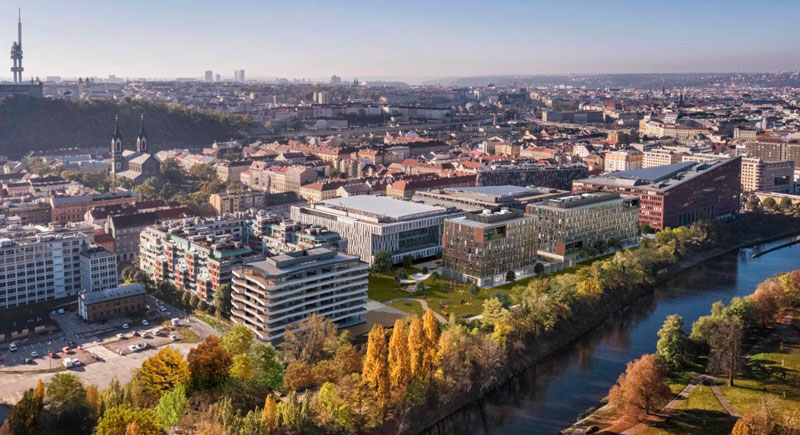 The change into a modern neighborhood

During several years Karlín grew from the old port into the luxury office quarter where rise the futurist structures by French, Danish or American architects. This project whose idea of started already in the middle of the 90ties is called the River City and includes the complex of 3 administrative buildings – the Danube house, Nile house, and Amazon Court. The construction of this project was realized between the years 2003 and 2009 and its mission was to build the best quality ambiance using the low-energy concept of the buildings. The key role played the maximizing of the daylight, reuse of the natural energies and the high level of anti-flooding protection. Let´s look at the 3 modern structures closer. 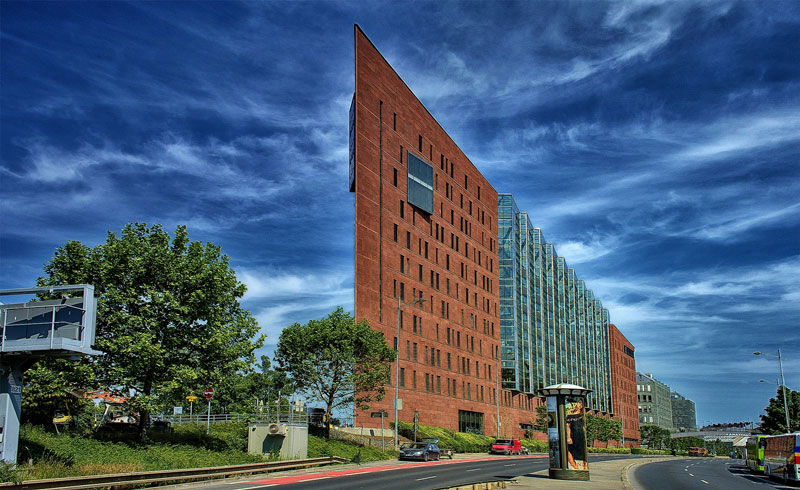 The Danube house looks like an entrance hall into the Karlín modern architecture. It reminds of a boat or traders‘ houses in the docks which probably refers to the Karlín original purpose – a port. It was built in 2003 but still looks very modern. The two American architects who designed it were from Kohn Pederson Fox studio. Thanks to its original shape and leaning roof it looks very dynamic. 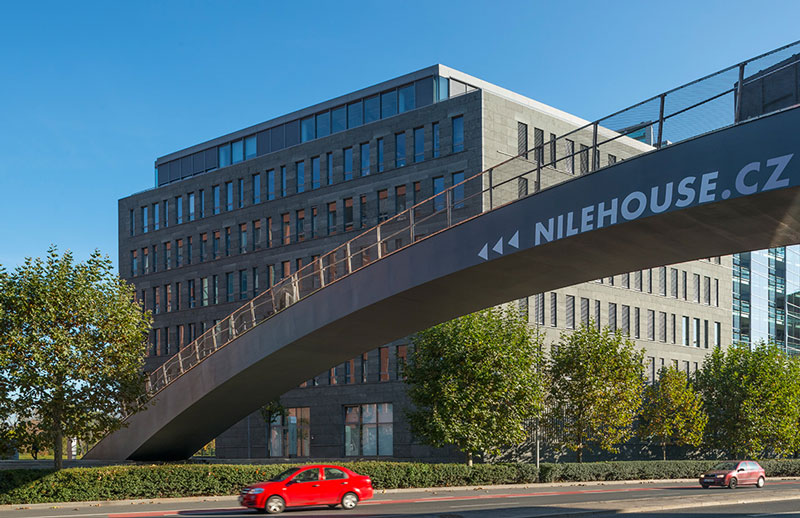 The Nile house was built in 2006 and it was a result of the cooperation of a French atelier RFR. It is a low-energy project using quality materials trying to limit the warmth loss or high accumulation of warmth. As the main construction material was used Brazilian green granite completed by glass components and with the Danube house and Amazon court is connected by a tunnel. 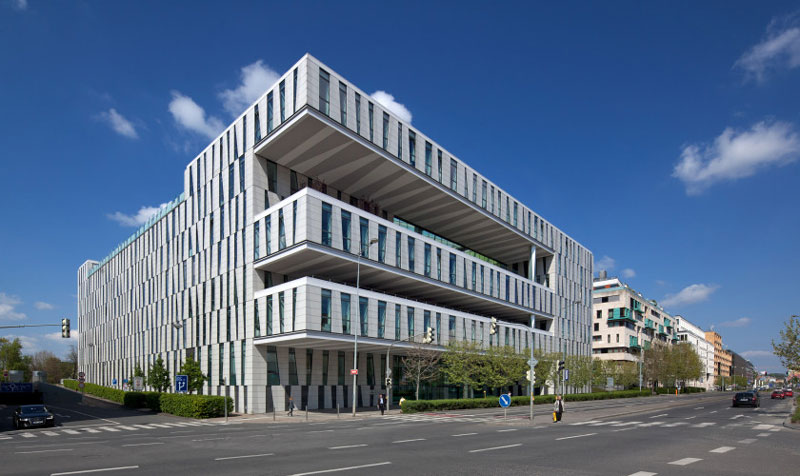 The Amazon court was designed by a Danish studio Schimdt hammer lassen in 2010. The facade was made from granite called Star white. The dominant of the building is the huge brightened atrium with colorful blinds. 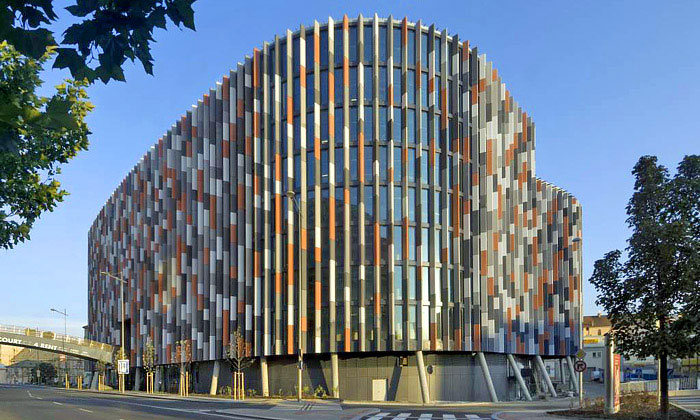 The Main point Karlín was designed by a Czech architects studio DandM architects and the construction was realized between 2009 and 2011. It was created with respect to the natural environment. The most significant detail is the organic shape of the building and the orange, white and grey color pillars functioning also as sun-shades. The building is cooled by the river water which flows through a channel in the underground of the building. 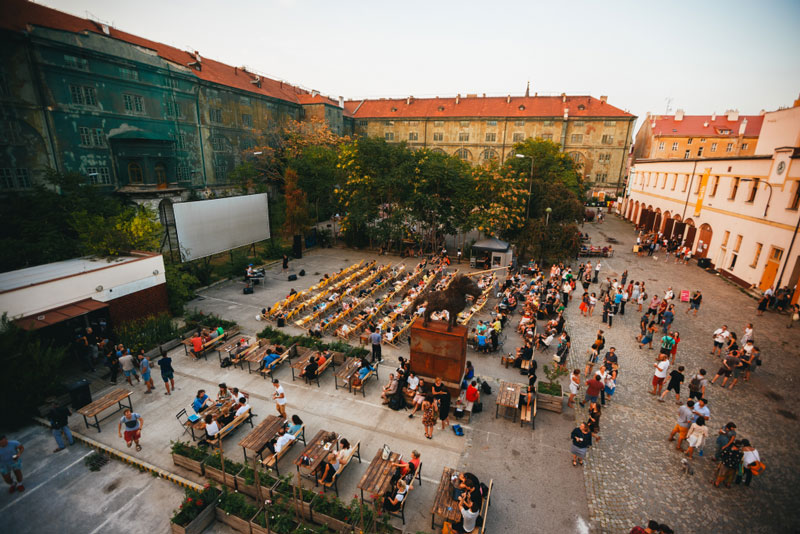 Reuse of the abandonned premises

Several steps further we can found ourselves in a different world. A very unique concept is represented by the Port 18600 – opened space on the river bank that was changed by a group of local inhabitants into a cultural centre offering a new space for workshops, lectures or concerts. You can find here a playground, seasonal bar serving the local Karlín beer, concrete furniture, etc. Similarly were reused also the former Karlín military barracks where the visitors can enjoy a viewpoint or a an outdoor cinema. The modernization also touches the Negreli viaduct, a cultural monument that is undergoing a sensitive historical renovation and there is a future plan to use the bridge arches as cultural spaces such as bistros, artisans workshops, shops, etc. Another typical face of Karlín is created by the former industrial buildings in Pernerova street. One of them is today’s Forum Karlín, a cultural space created in factory of a former engineering concern of a Czech company called „ČKD“ that used to produce for example locomotives or trams. 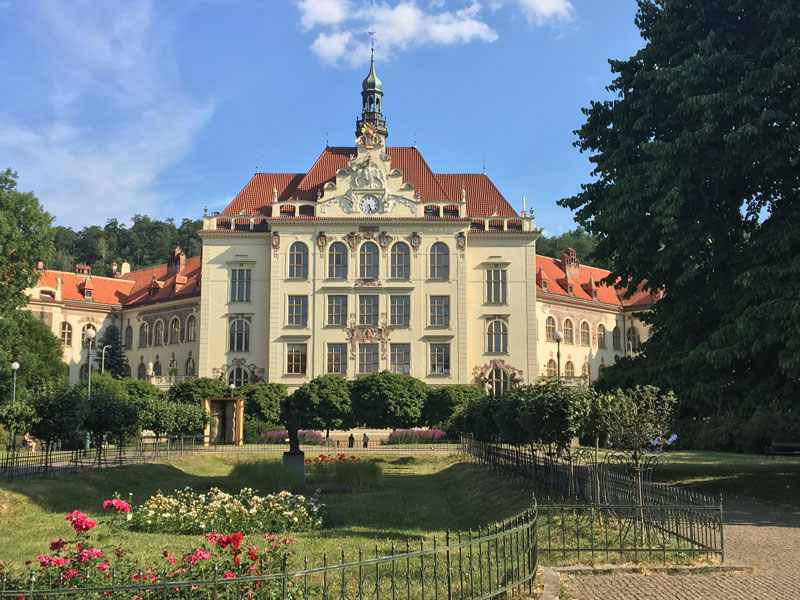 Apart from the modern structures, reused factory spaces, in Karlín there are a lot of green areas and unique plazas. Especially in the heart of the Karlín neighborhood can be found beautiful spacious squares and parks. The dominant of Karlín is the church of Saint Cyriland Methodius situated on Karlínské square where from time to time take place farmers‘ markets or other food events. The nice parks are welcoming to sit down and have a picnic. On Lyčkovo square, you can feel the historical atmosphere of ancient Karlín. The highlight of the square is the building of the elementary school from 1904 built in the style of historizing art nouveau and this park reminds of a French style garden. 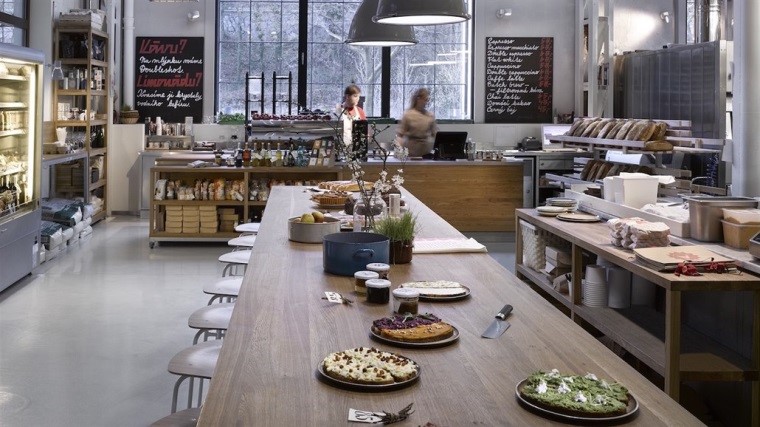 While visiting Karlín you cannot omit the rich gastronomy scene represented by a great number of fashionable bistros, restaurants, cafes, wine bars, etc. These places contribute to today´s Karlín unique character. Their mothership is cafe Můj šálek kávy (My cup of coffee). Among the famous bistros, you should not miss bistro Proti proudu or restaurant with Michelin award Bib Gourmand Eska. If you love wine, then stop at the wine bar Veltlín. The best tea in Prague is served right next door – at the teahouse Tea mountain.

From Karlín to Žižkov district

Your discovery walk-through Karlín neighborhood can be concluded at the Vítkov hill where you can admire an amazing view of the city of Prague. The fastest way to get there is through the tunnel that connects Karlín and Žižkov districts. The tunnel can be easily accessed from Pernerova street. You cannot miss it thanks to the decoration by a Czech street artist Timo and his writing „Neboj“ (Don’t be scared) above the entrance of the tunnel. This writing tries to encourage the Prague citizens to keep using this tunnel which is infamous for its darkness that was often used for robberies or other crimes. If its just rumors or truth, you can try yourself.