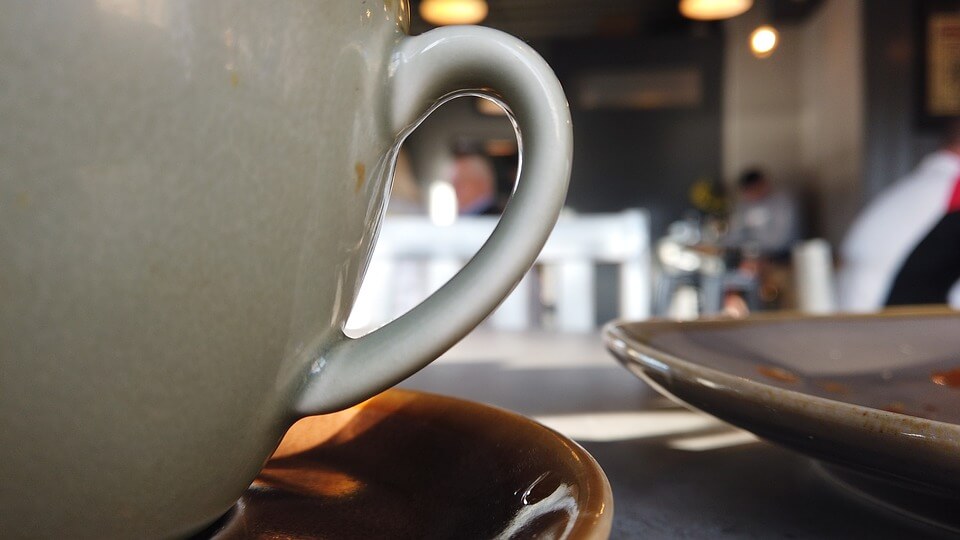 Before taking you on the journey to the places of delicious coffee,  let’s first get some general knowledge about the coffee culture.

The English words coffee and café derive from the Italian word caveé which has its origin in Arabic qahwa. The Arabic term qahwa originally referred to a type of wine, but after the wine ban by Islam, the name was transferred to coffee.

European knowledge of coffee (the plant, its seeds, and the drink made from the seeds) came through European contact with Turkey, likely via Venetian-Ottoman trade relations. The first coffee house appeared around the year 1511 somewhere in the Middle East. It quickly gained amazing popularity and spread around the world. With the years, coffee houses became crucial spots – the history was discussed, the important people met, including the spies wanting to exchange secret information, the poets and writers got their inspiration, the future lovers observed each other with shy smiles… Until nowadays, coffeehouses largely serve as centers of social interaction: they are the places necessary connected to our daily life – you meet with people, read, talk, write or just observe the others. Since the development of Wi-Fi, coffeehouses have also become places with easy access to the Internet.

There are hundreds of coffee places in Prague. And they are amazing! Some of them are trying to come up with the tastiest coffee, some of them offer the coziest atmosphere, some of them push the idea of a coffee place even further and you can order the best meals there, some of them want to surprise you with something new that you wouldn’t find anywhere else. It’s not possible to name all the great Prague coffee places – you would spend the whole week just reading our article. Moreover, we want to leave some space for your discoveries. So let us name just a few that we recommend wholeheartedly.

The coffee got to Prague from Vienna. Viennese had taken the coffee culture from the Turks who unsuccessfully tried to conquer Vienna. The culture of coffee houses developed there in about 19th century. We were still part of the Habsburg Monarchy – and wanting to show that we were not any less progressive that the capital of the monarchy, we used all our skills in building places that are admired until nowadays…. From several amazing ones, we have chosen. 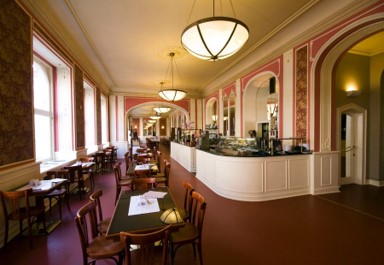 If you want to go back in time more than 100 years ago and dream a little bit, this is your place. Sitting on an elegant chair you can almost see decent gentlemen in suits smoking long cigars and playing billiard and beautiful ladies wearing decorated hats and chatting with each other. Welcome to the life of the early 20s, when Café Louvre was the cultural and social centre of higher society. Even the first Prague women’s lounge appeared here!

Czech personalities such as Franz Kafka, Tomáš Garrigue Masaryk or Karel Čapek were frequent visitors. Albert Einstein also visited this place during his stay in Prague. Under communism Café Louvre was destroyed as a symbol of the bourgeois lifestyle, restored in the early 1990s.

Located conveniently in the center, apart from the atmosphere, you can enjoy delicious coffee, yummy meals, and great cakes. You will probably meet a famous Czech actor or singer here, as they love this spot. 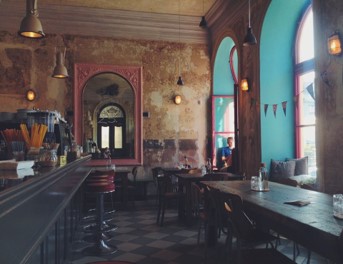 This café is located near Letenské square. Letná part of Prague is favorite by young people for the beautiful architecture, more affordable living, green parks and a lot of interesting places to go and spend time. This coffee place amazingly reflects the spirit of this part of Prague. It combines gourmet coffee with a friendly atmosphere and a charming, extraordinary, shabby chic interior. Here you can enjoy a selection of coffee, home-made lemonade, soups, savory and sweet baked goodies. This is just a perfect place for breakfast or a light lunch. 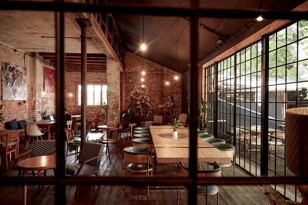 An unusual café appeared on the site of the former joinery. The building – abandoned for a long time –  was meant to be demolished. Yet a group of six friends saved it, reconstructed it using their own money and turned into a café with a charming interior and almost unearthly atmosphere.

The place offers quality coffee from the Nordbeans roaster in the north of Bohemia, fresh lemonades and home-made treats, as well as a careful style of serving on wooden chopping boards. We also give a big plus to always-smiling staff. In the summer you can sit in a wild garden in the shade of a large chestnut tree – on old school chairs, stairs or even a gently laid beam.

There is also a separate gallery and a beautiful toilet with innovative and environmentally friendly features. The transparent kitchens will soon be added to the café and so the guests can observe the cooks do their magic during culinary feasts and shows which are planned weekly. 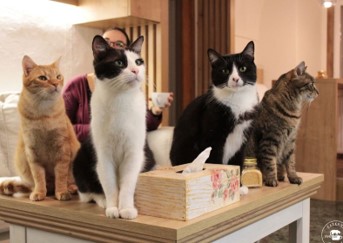 Do you like pets? Do you like cats? Do you know that a cat company can be deeply healing?  Right in the heart of Prague’s Old town there is a family cat café. It was created as a pleasant place for all who want to relax in the company of cat pets.

In their offer, you will find only quality products from home vegetarian cuisine or verified suppliers. And with the great coffee and touch of the velvet cat hair, you will experience real heaven. 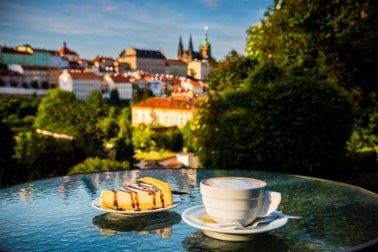 If you are one of those people which taste is intensified with a great view, you have to visit Café Taussig. Prague is the place with many amazing viewpoints where you can admire charming views of the medieval city that got preserved due to the fact that this country was invaded and oppressed for so many centuries.Come to Café Taussig, sit quietly and just enjoy the breathtaking view.

This place employs disabled people and thus helps them develop their working and social skills. By coming here you also support this great idea. 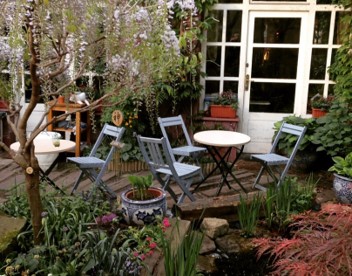 Letná is truly our favorite part of Prague. Go stroll in Letná park first and enjoy the view of Prague as well as the look at young happy families having a picnic. After the nice stroll, you can celebrate your day with the visit of Alchymista Café and you will feel as if you are visiting your grandmother. Cozy place with old fashioned furniture, homemade cakes, piano, and a magical lovely garden will fill you with joy and happiness. And we love the innovative menu of drinks! Are you curious? We will not tell you anything more – just go and check for yourself. 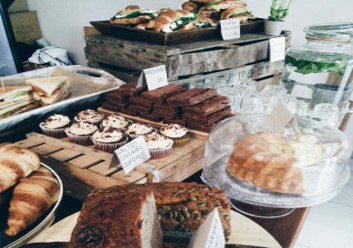 The idea of big wooden tables where you sit together with other people to mingle came first from Great Britain. Coffee Room gained amazing popularity in Prague very quickly. Not only because they support to create new friendships yet moreover they truly make the best coffee in Prague. We have tasted coffee in many places – the coffee in Coffee Room is of the highest quality and the best taste ever. 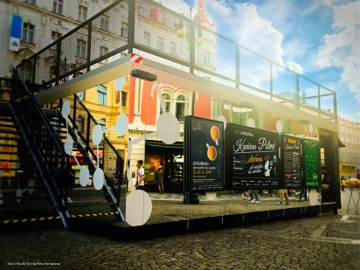 Náměstí Republiky, in front of Palladium - only once a year – during July

We can promise you – you will never forget the visit to this place in your entire life. Once you enter this coffee room, the world – as you know it – stops existing. Welcome to the world of blind people. You won’t see anything, you will be surrounded by complete darkness. A blind person will take care of you, take you to your table and bring you your order. Other senses that you have will become more intense, the coffee will definitely taste differently.

Karlín, an ancient neighborhood with a young spirit